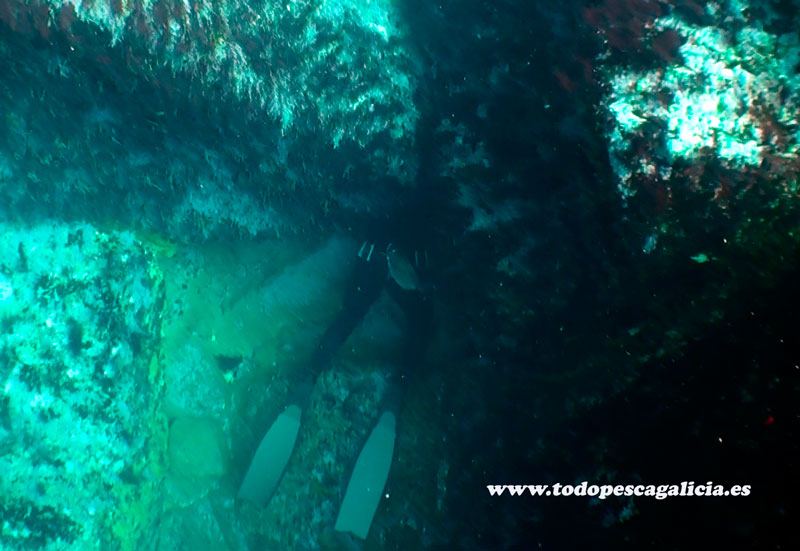 As the name itself says, this type of spearfishing is about checking those spots in which we think we can find fish. Cracks, big rocks…

Any place can be good. And each specie prefers ones or others. For this fishing technique, using a torch to illuminate inside is a must. But we should avoid using it if we can see inside without it. Because artificial light scares fish quite a lot. If putting our head inside and getting our eyes used to the dark is enough to perceive the fish, it would stay more calmed and it would be easier for us to shoot it than if we turn the light on. The very white one (with high color temperature, 5500º K is the color temperature of the sunlight) makes them even more scared. Due to this the new led torches in general make the fish more scared than the old halogen ones, with a lower color temperature. And also usually, due to its higher power). As we say, if we can distinguish something against the light, it is better than illuminate. For this, sometimes, ti will be necessary to wait a little bit until the eyes get used to the change.

A lot of times it will be easy to know which caves are good or have fish inside, because we see them go inside or there are more of them around. Is the case of the sea bream, with some of them around and other inside (usually the biggest ones). The white sea bass, during the spawning season will do the same, or during the summer the big ones resting. And also the ballan wrasse. One specie that is in a cave almost always is the conger. And its caves are easy to identify a lot of times. And also, when there is a conger in a hole, if we kill it, another one will come to occupy the hole soon. It happens the same with good lairs of other species. This spots have to be cared, don’t overfish them or they will stop being good spots. If we go constantly to a good cave, there is a point when the fish stop going to it.

For this fishing technique, the best choice will be short guns. 75Cm or even less, depending on the size of the hole. A spear release is important to lose the minimum amount of shafts. The spears will be better the thicker they are. For example on 6.5mm or 7mm (for other type of fishing we can use 6 or 6.25). The use of the multiprongs avoids entanglements, but it also damages the fish more than a normal shaft. They are used often in competition. Here, the rubber band doesn’t have to be so progressive or fast.

It is important to take in mind that this is a type of fishing where the shafts suffer quite a lot. Blunt tips for hitting the rocks often or bended shafts. To avoid this damages as much as possible we should use an adequate band power. It’s pointless to have a very powerful set of bands if we are going to do short shoots, inside a cave. Just the necessary to pierce the fish. The more power, the more damage we will cause in our spears. Except the cases when it is possible to go for very big fish, like big conger, big sea bass or the grouper in another waters.

In the case a spear gets entangled in the rocks, if we pull with the hand, we will be careful not to do it to the sides, or we will bend it and it will remain useless. If we have a spear release it will be better. Using it we will extract the shaft, or in the worst case scenario we will break the barb, but we will save the shaft. The utilization of this tool is to hook it up on the trigger slot and spinning it. As we said before, we will not pull to the sides.

We also should avoid to pull from the line, because we can end up cutting it.

The spearfishing in caves is easy and it gives very good pieces. It’s a specially useful technique when we are starting or during the spawning season.