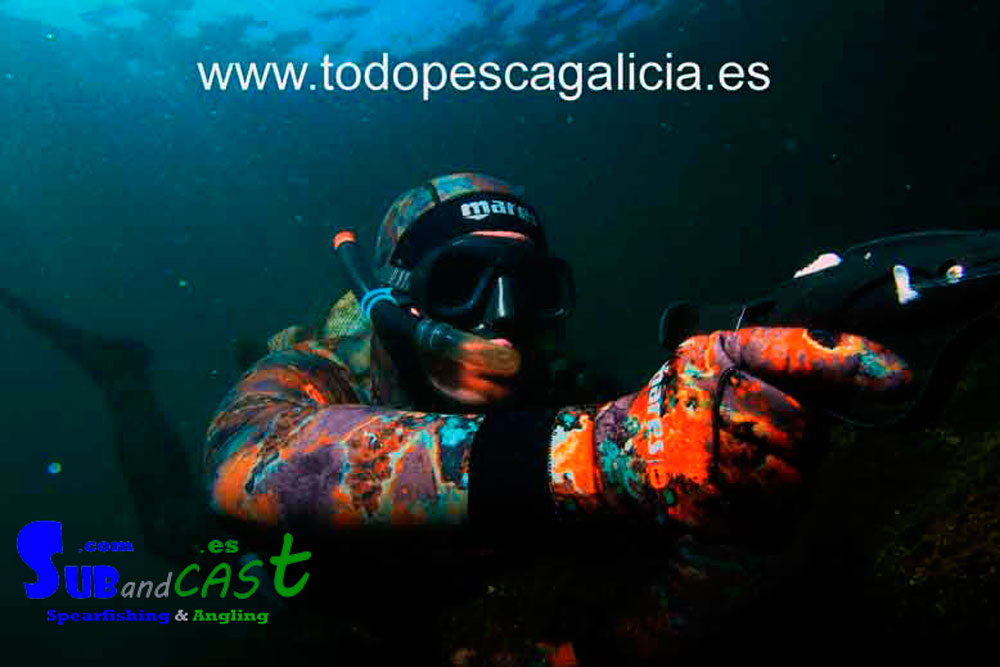 Every spearfishing thought about it and there are different opinions. In this article we are going to explain what we think and why.

In spearfishing there are many different techniques: into holes, waiting, bottom hunting… And we need specific equipment to every one of them. For example when we are looking into holes we need shorter spearguns, torch… And in open waters we usually need longer spearguns, more powerful.

So the wetsuit should be the same. There is different thickness depend the water temperature. Different density, elasticity… if we are in shallow and colder waters or if we are in deep spearfishing, warmer waters… So the camo should be different too (if it works) In the same spearfishing day we could find very different places: sand, kelp, rocks, shallow waters with foam… and every one of them would need a different camo. But first we are going to talk about if it really works in spearfishing.

A spearfisher with fins and speargun is a very big object. Complicate to camouflage. 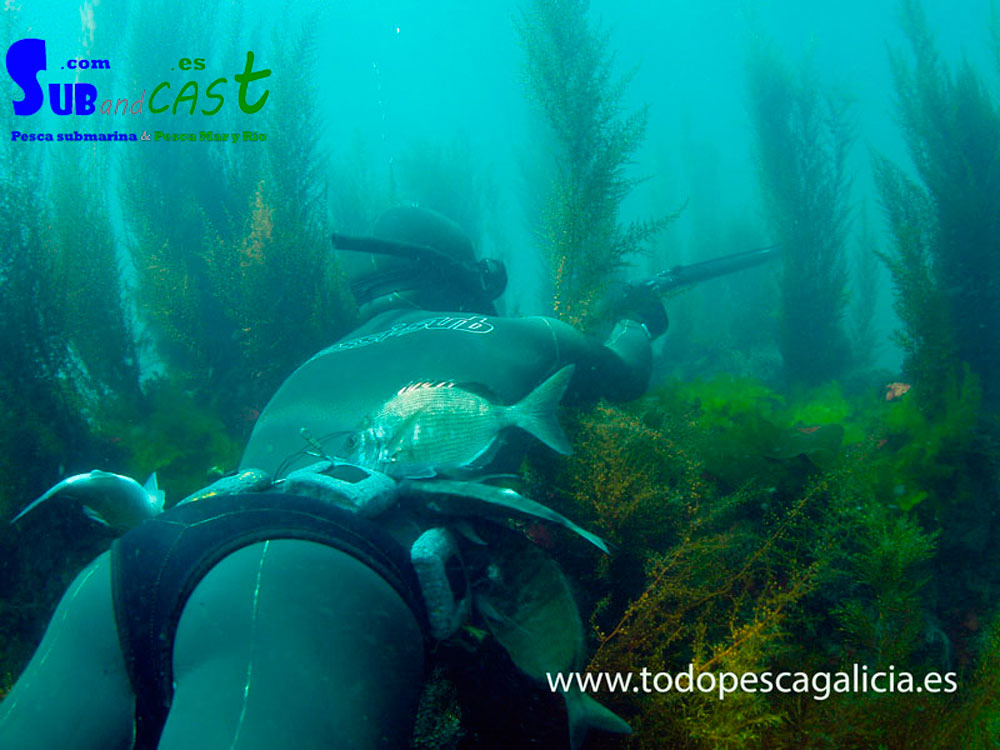 The fish first detected us by the lateral line, and after that they come to see what is happening. Is in that moment when they use their sight. The best to control us is watching us. So they come to us, to see us. Knowing that, is really important the camo?

Our opinion is NO. The most important is being in a good spot, hided by rocks or algae only showing a small part, don´t make noises which could frighten the fish, don´t move our eyes… Basically have a good technique. 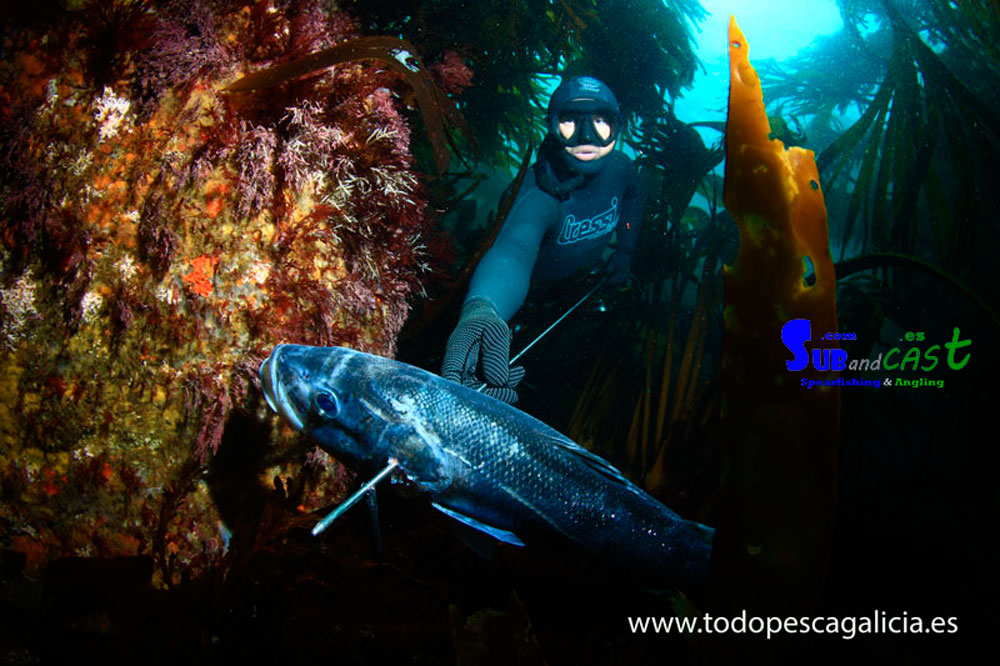 We talk before about the colours. Red colours should be from places with kelp, green for the Mediterranean posidonia. Black camos and greys a bit for everything but mainly breaking the spearfisher shape. Blue colours for blue water hunting… But now we find a big problem: what happen if we are fishing in a spot with kelp, sand, rocks and foam? Many different conditions. 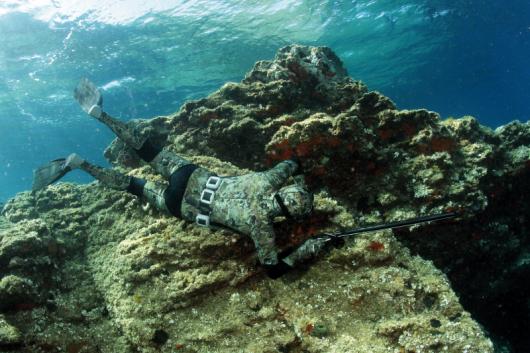 In our opinion, based in the experience, camouflage is marketing. Just marketing. Years ago most of the wetsuits were black. So they need to compete in quality. Wetsuits quality and price. Then a brand made something different, a new colour. Customers liked it and by that started camo. More marketing so lot of people (influenced by sponsors and marketing) thought that were better. But all brands should change into camo. Different ones. Colours, mixes and sometimes really strange things. The different sells better. When we go into a shop the camo wetsuits are more beautiful than blacks. Sell better. 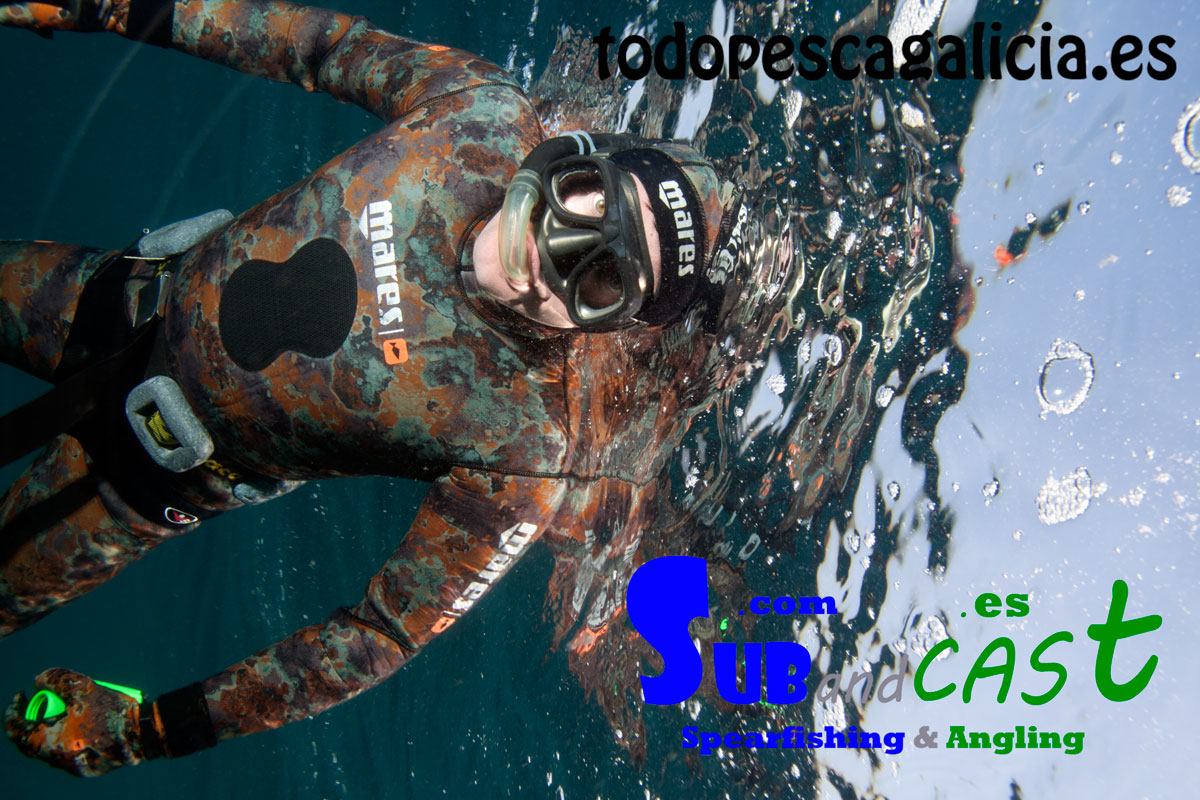 One good example is spearfishers who are using green camo. It´s a Mediterranean camo but used lot of times in Atlantic waters, with kelp, brown and red algae. It´s use the opposite that we need. But we see that they are fishing exactly the same that if they were using a good camo or a black wetsuit.

Here is other important factor: psychological factor. If someone is thinking that it will work, for sure it will work. He is going to have more faith. It´s the same when we are using a speargun which we used a lot of times and we don´t doubt about the shoot. We won´t fail. 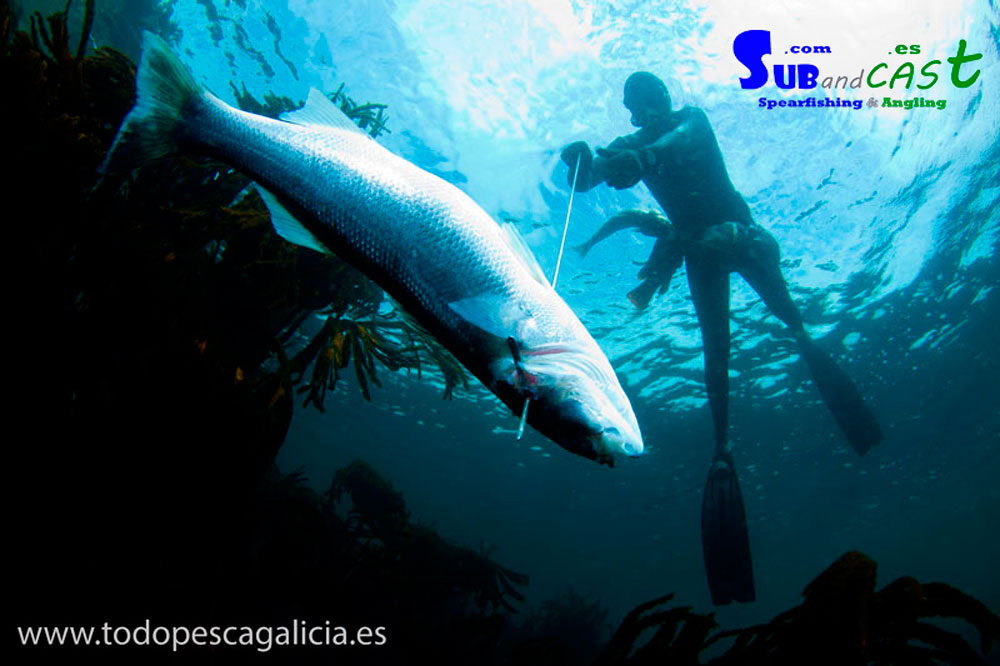 Some buddies think that the camo helps braking the shape. That makes the spearfisher smaller to the fish. We can argue a lot about it because will start again the lateral line and how it works. Because the fish feel us, he knows that we are there and the camo is not important.

Our experience after a lot of years in competitions and being sponsored by different brands, using many different camo wetsuits and black wetsuits, is that it´s not important. It doesn´t affect. I saw the fish the same. Was the same trusting and the same mistrustful in the fish. Some years the brands told me to use a specific wetsuit. Other years used a different one. I changed the same day the wetsuit: black into a camo or different camos. And it was just the same. And in competitions, if the camo was really important I would use camo. Or other competitors, but you can see that some of them use camo, and other ones (most of them) black wetsuits.

I found only one good thing in the camo. And is that protects the smooth skin wetsuit from the sun.

Some spearfishers say that a lot of fish use camouflage. Like the monkfish, flat fish, spider fish… But the difference is that this fishes hunts waiting. They wait until one fish pass close to them. They can be hours waiting. That´s not our situation. We need to attract the fish, his curiosity. Most of the predators have the belly in light colours (to be less visible when they are seen from the bottom to the surface) and the top of the body in dark ones (to be seen from the surface to the bottom) But we can´t be compared to a fish.

As an anecdote one time I tried to camouflage a jacket. I invented colours, started to mix it and finally I had something terrible. It seemed more a Drag Queen that not a spearfisher. Whites, oranges, yellows… really horrendous. Friends made a lot of fun. But I used this jacket a lot of time, in competitions too. And was exactly the same than the black or camo ones.

In conclusion we think that camo is a marketing result. It won´t help us to have easier fish. And we can see it in how it has been introduced. Some brands telling that it was better, other ones trying not to be back. We think that it´s not better. But it´s not worse neither. It is just the same. We are going to have very similar results.

That´s our opinion based in the experience. A lot of years in the water, competitions and different sponsors. Each one has his own opinion, and there are some spearfishers that assure the camo works better for them. We think that it´s psychological but if it works better to you, of course don´t change.

What do you think? Tell us your opinion in facebook or in the forum.

if you are interested in wetsuit heres is the link to our friends: www.subandcast.com your irish spearfishing store and shipping all over the world. Always the best price and professionals if have any doubt!

HOW TO EXTEND YOUR APNEA AND DIVE DEEPER

Spearfishing in a wreck

PEE IN THE WETSUIT – DANGERS AND WHY WE MUST AVOID...

Tips for women in Spearfishing