There is a typical doubt in spearfishing. I have had different opinions about that when one or another type was the predominant style. After testing all of them in different situation I reached the conclusion I am sharing today. With some of them I injured myself, with other ones I could see the pros and cons, others just messed the whole day… In this small text I will try to explain my impressions. 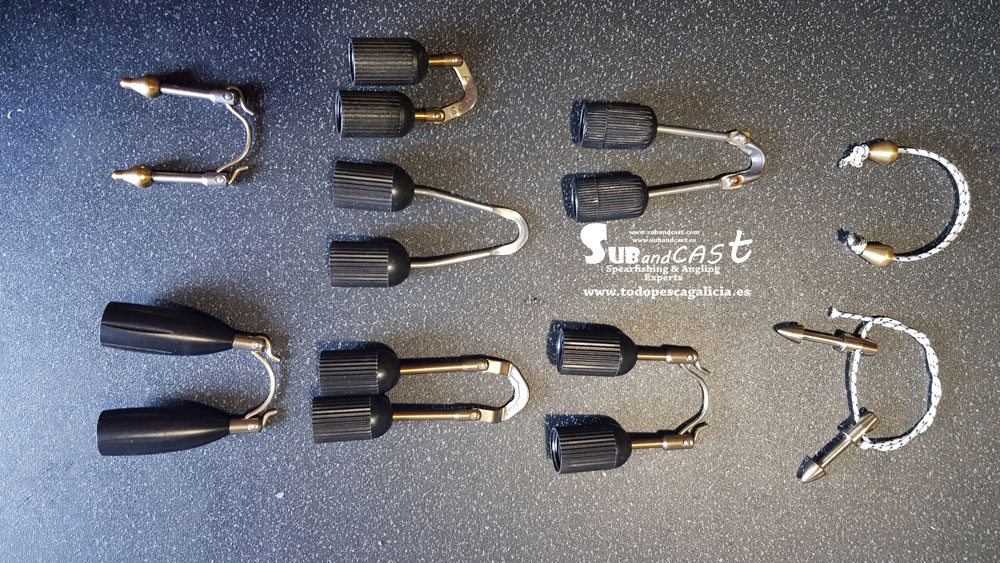 In rubbers with screw on their tips we mostly find metallic wishbones in all their different models: flat, round, sharp… There were almost the only ones years ago (in the normal guns in Europe) But when the “rubber by meter fashion” arrived everything changed. We will see that in a new article I will upload soon, explaining benefits of the different rubbers.

In my opinion the bad name that these wishbones have comes from a specific model used years ago. Many of us will never forget these wishbones that most brands used in the past: cressi, Sporasub, Picasso… These models, like the one we can see in the picture, because of their shape they didn´t fit properly in the Tahitian spears (shafts). If we don´t have a good technique loading the gun, after loading the gun several times the shaft was being damaged and finally the wishbone didn´t fit on it properly. So finally, it slipped when we load the gun, hitting our fingers.

Because of the shape that this wishbone has and because of being a bit sharp, it hurt a lot and cut our finger. Once it injured me, tearing off the skin in my little finger. All of it, more or less 5cm. I needed to go out of the water to my boat, removing the gloves. I found the skin inside the glove 3 weeks later when I came back spearfishing.

In this image we can see how it hits our finger.

But the “new” wishbones, used in different brands for long time like in Pathos, Salvimar… are now in most of the “good” guns. Leaving the other model to basic guns or old models mostly. It is something that we should check and if the gun does not have a good wishbone we should change it ASAP. It is something I always recommend to my customers and I use to do in all the guns I sell. We can see two different models, with flat bridge and round bridge.

The flat model use to be stronger. Don´t brake easy and fits very good in the shaft. If it slipped it wouldn´t hurt us too much. Just the hit but do not cut our fingers.

The round model is the one I like. They fit perfectly in the shaft, do not damage it. Doesn´t matter if we load the gun with some angle (shaft-wishbone) as the round bridge will always fit perfectly.

And if it slipped (never had this problem) they wouldn´t hurt us too much. Just the hit. But it is not a strong hit as the rubber will take our finger and move our hand with it and most of the times will slip all along our hand. But it is not all good on them, after long periods using them and if we do not have a good technique loading the gun we could brake the bridge. I never had the problem but some friends had it. It is not a big deal as we can change the bridge, there is the spare parts for them.

An important consideration to have on the wishbones is their length. If we use long ones we must use shorter rubbers. That will be harder to load and less power. If we use a shorter wishbone we can use a longer rubber in the same gun at the same stretch ratio. That will give us a smoother shot, improve the accuracy, less recoil and easier loading. See that we can use a 2-3cm longer rubber in each side (a circular rubber around 4-6cm longer) and that would be the difference of using a 75cm or a 85cm. Check that because it is an easy way to improve your guns next time you need to change your rubbers (you can change the whole set up)

I can´t see the benefits of using dyneema bridge in normal guns. I will try to explain it. In a one rubber (or parallel rubber) I can´t see any improvement with a dyneema bridge instead of a good metallic. It will break easier. We will need special shafts like shark fin or similar or use Tahitian but being filed the notch before or it would cut the dyneema pretty soon. And in some guns the rubbers won´t be in the right position like with a metallic one (with the metallic they go parallel and with the dyneema they go too close to the shaft)

I can see the benefits using double rubber guns and of course in rollers. For these guns dyneema wishbone is the best (we shouldn´t use another one). 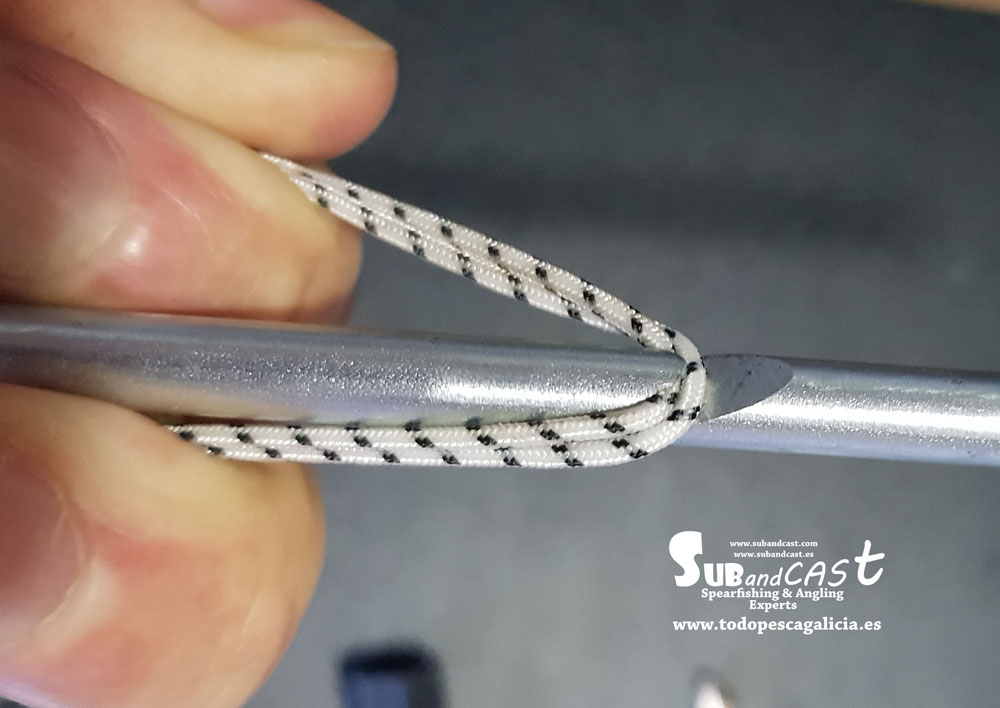 I heard some people saying that dyneema wishbone makes less noise. I do not agree. When we are shooting the wishbone does not make any noise. It can only make it when it is unloaded and can hit the barrel but not when we have it loaded and we are spearfishing.

There are some models we can use dyneema or metal bridge, changing just the bridge. It is a metal piece that goes in the rubber and at the tip we can adapt the metal bridge or the dyneema.

Talking about performance, no one is better than the other (talking about the good metal and the dyneema). I would use metal wishbone in “normal” guns with one rubber and dyneema in double rubber or rollers.

But taking care to avoid the “bad” metal wishbones like the ones we saw at the beginning of this article. They are more dangerous and could damage the shaft. When we load the gun we use to do it with an angle shaft-wishbone, we use to bend a bit our wrists so these wishbones won´t fit properly, sometimes will be just the tip. Load aster load will damage it and finally will slip and hurt us. With a round wishbone it will never happen. And with a flat one would be much harder. With the round doesn´t matter the angle and will be always good.

HOW TO EXTEND YOUR APNEA AND DIVE DEEPER